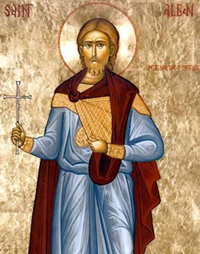 St Alban’s was established in 1900 when Ilford was a very different place. In the early 1900s Ilford was a growing early “commuter-belt” and a lot of new housing brought about the need for a new church, hence we were founded to meet the needs of the burgeoning population. We began as a daughter church within the Parish of Great Ilford and only became a separate Parish in more recent times. Since our foundation Ilford has undergone many changes.  Ilford is now a “hub” for the outer East End, with good commercial and travel networks, and people from across the globe have been drawn to make their lives and homes here. The 2011 Census shows that most people living in the geographical Parish of St Alban’s are of non-British heritage, the vast majority coming from the Indian sub-continent, with many also coming from from Africa and the eastern countries of Europe.
In consequence, many of our people come to us from outside the geographical area of the Parish boundaries but we are blessed to have amongst us Christians from every corner of the world, many of whom have recently moved into South Ilford. We aim to be a “meeting place” for all people regardless of background or personal circumstances.  Everyone who comes to us is accorded the dignity of a person made in the image of God.

St Alban’s offers a welcome to all who seek to know the truth of God as revealed in the Scriptures, in the person of Jesus Christ and in the teachings of the Church.  As such we adhere to the traditions of the Western Church, first delivered to St Peter and the Apostles, and we remain obedient to the teachings of the wider Catholic Church.  That means in practice that we believe that only men are chosen by God to be priests and that marriage must remain only between a man and a woman.

St Alban’s has taken steps to ensure that the Apostolic heritage that we believe in is not compromised by questionable developments within the Church of England, namely, the ordination of women as priests and the likely future consecration of women as bishops.  To safeguard that we have sought and received the care of the Bishop of Richborough, who provides us with the assured oversight we need.

We extend our love, respect and charity to all who have received office in the Church of England, regardless of gender, but we must seek to uphold the promise given to us by the Church of England that those who dissent in conscience from the ordination of women as priests and bishops have an “equal and honoured” place in the Church which is our shared heritage and that we too are “loyal Anglicans.” We hope and pray that we can flourish mutually for the sake of building the Kingdom.